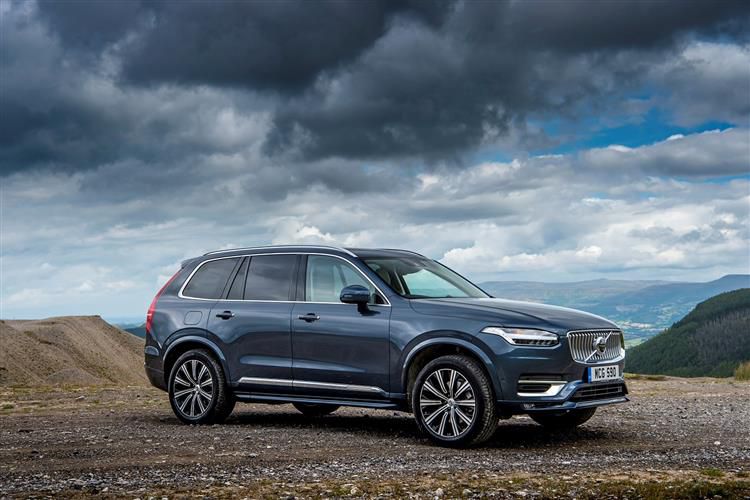 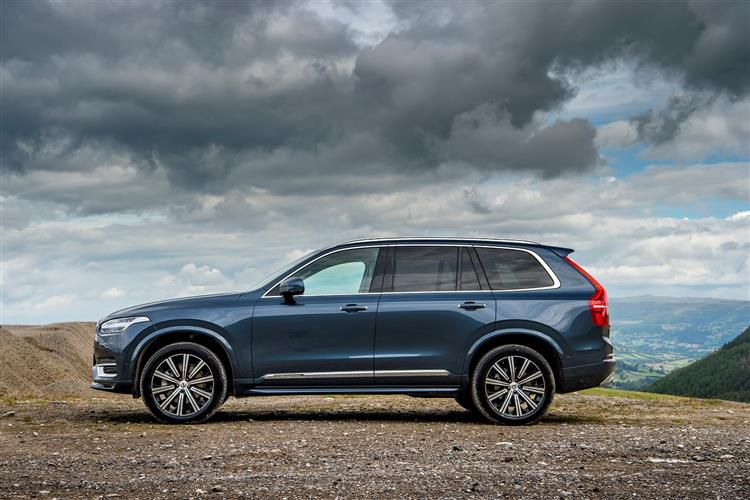 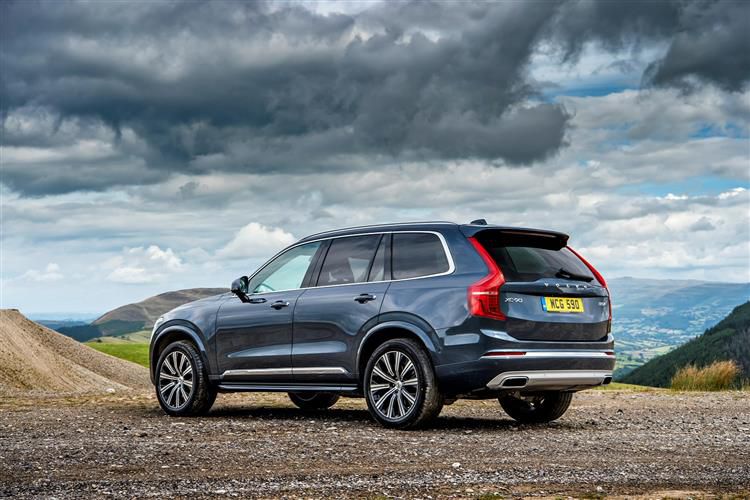 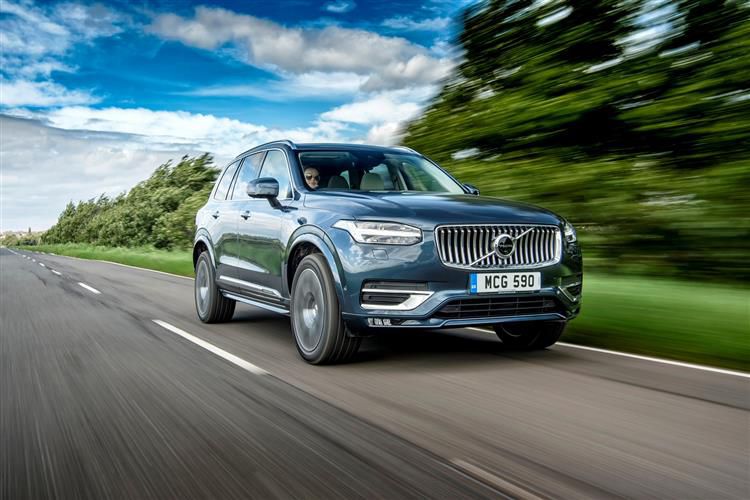 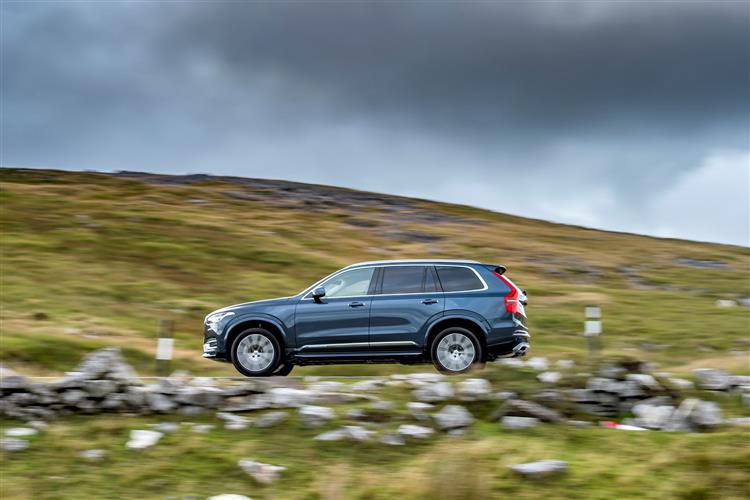 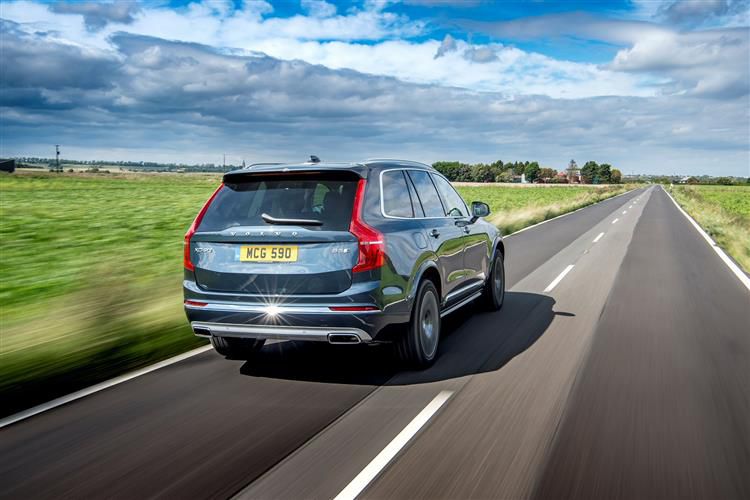 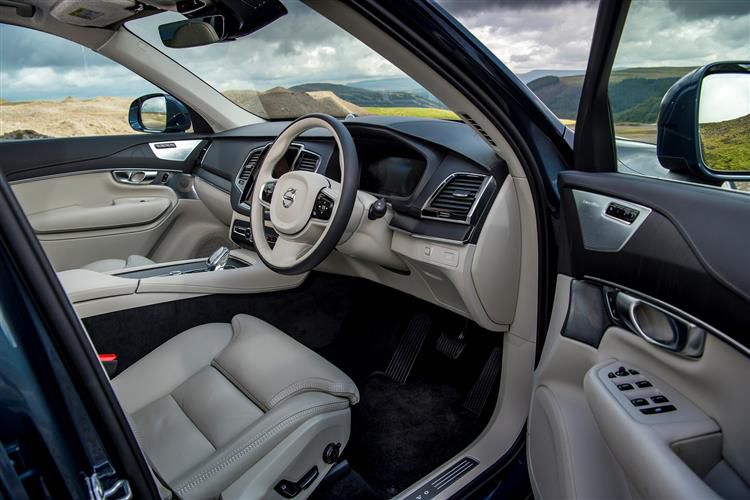 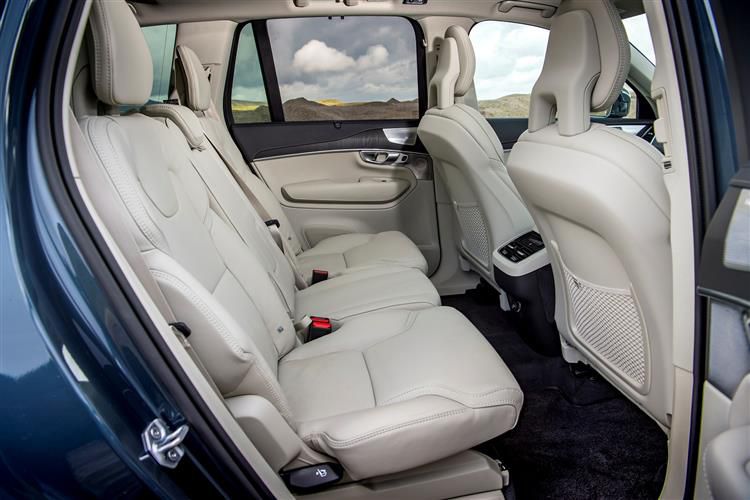 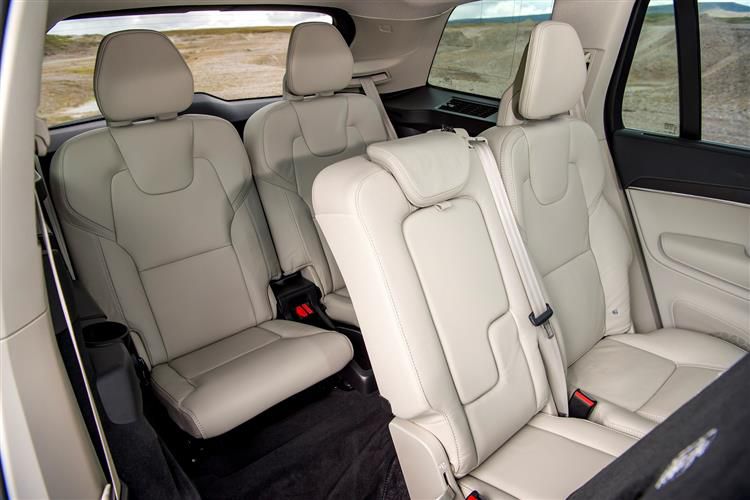 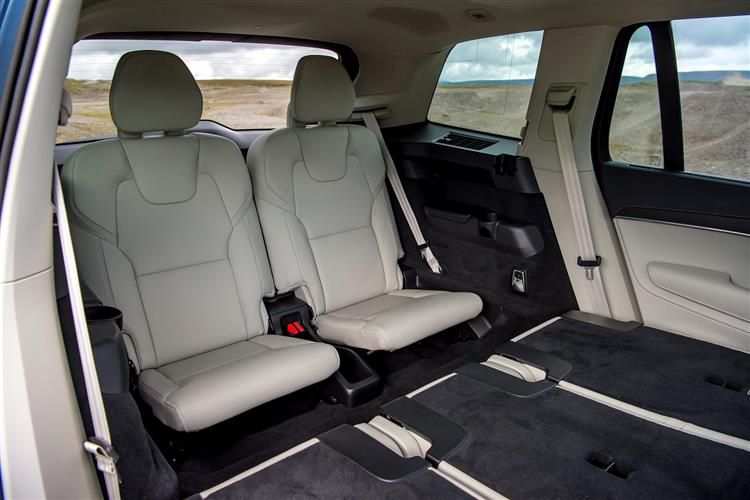 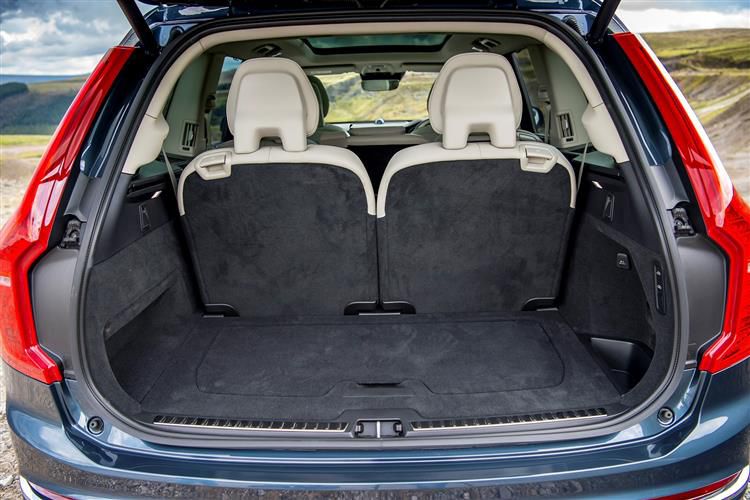 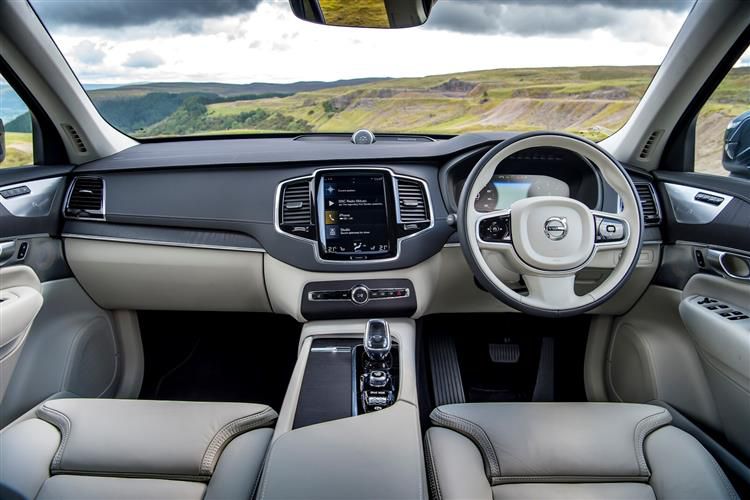 This improved second generation Volvo XC90 aims to make the most of its sleek Swedish design values. Jonathan Crouch takes a look.

Volvo's second generation XC90 was worth the wait, a seven-seat luxury SUV that has given key rivals like Audi's Q7 and the Land Rover Discovery a lot to think about. Safe, efficient, clever, practical and stylish, it has re-established this Swedish maker as a credibly prestigious automotive brand. This revised version offers a slightly smarter look and some extra electrified tech. It's well worth a look.

The Volvo XC90 is just about the perfect example of a vehicle that created a niche for itself that no rival could seem to penetrate. If you wanted a 7-seat luxury 4x4 that was never really a sports utility vehicle, that was supremely comfortable and, above all, was neither shouty like a German nor trying too hard to fit in with the country set like a Land Rover, it was plum perfect. Nothing even got close. Because of this, the first generation XC90 hung around for ages. After all, why mess with a winning formula? Later versions, sold right up to 2014, tidied up the basic formula but were otherwise much the same as the models that first rolled into dealers in 2002. That's one heck of an innings. At least though, it paved the way for something different. There was no way that the scond generation XC90 would be a mere 'evolutionary' design. Even so, few were ready for quite the radical change Volvo's Chinese owners Zhejiang Geely have funded. The low-key approach of old? It's fair to say that has been usurped by a much more extrovert look.

The key news with this revised MK2 XC90 model lies in the introduction of an advanced kinetic energy-recovery braking system, which is coupled with the company's existing 2.0-litre internal combustion engines to create a integrated electrified mild hybrid powertrain, identifiable by the brand's latest 'B' badging. Otherwise, things are much as before. The car sits on Volvo's light, stiff 'Scalable Product Architecture' (SPA) platform. Most customers choose the 235hp B5 mild hybrid diesel but there are also two mild hybrid petrol models too, the 250hp B5 and the 300hp B6. The other option is the Recharge T8 petrol/electric plug-in hybrid model, billed as 'the world's most powerful and cleanest large SUV'. This delivers a combined 386hp output, with a thumping 640Nm of torque. 62mph from rest is dispatchd in just 5.8s, yet this car can also give you 26 miles of pure electric driving range when fully charged. All the engines drive all four wheels via an eight-speed automatic transmission. Across the range, there's the option of an 'Active Four-C Chassis' package, which gives you four-corner adaptive dampers and electronic air suspension. Handling strikes a good balance between comfort and agility; cruising refinement meets the required executive standard; and there's the potential for a mild amount of off road prowess. A standard 'Pilot Assist' system offers a degree of highway-orientated autonomous driving technology. And you might be interested to know that conventional variants can tow up to 2,700kgs.

On the outside, this refreshed XC90 offers subtle upgrades to the original award-winning exterior design, such as new wheels, exterior colours and a revised front grille, among other details. Otherwise, things are much as before, with a sculpted bonnet flowing into LED front headlights with a distinctive so-called 'Hammer of Thor' design. The interior still seems boldly-styled, with a massive tablet-like touch screen control console helping to create a cabin that's modern, spacious and uncluttered. Volvo's clearly put a lot of budget into driving up materials quality and this XC90 gets soft leather and wood with handcrafted details, including an optional gear lever made of crystal glass from Orrefors, the Swedish glassmaker, and diamond-cut controls for the start/stop button and volume control. This genuine seven seater features innovatively designed seats that also free up interior space for passengers in both the second and third seat rows. Even the third row can seat an adult up to 170cm tall. As for the boot space on offer, well that's inevitably going to be a little restricted with all seven seats in place, though even in this configuration, you still get 397-litres of luggage space. Fold the 3rd row and you can load up to 1,102-litres, if you pack to the roof.

All XC90 variants come with 7 seats, automatic transmission and AWD and there's a choice of three core trim levels - 'Momentum', 'R-Design' and 'Inscription' - with additional 'Pro' versions of the latter twoh. Most UK buyers will want the volume 225hp B5 diesel version; the unique Recharge T8 petrol/electric plug-in hybrid variant is priced from around £68,000. Pricing for the mild hybrid XC90 models starts from around £55,000. Top models can be ordered with features like 21-inch Inscription alloy wheels and powered, heated and ventilated seats trimmed in Nappa leather. Inside, the tablet-like touch screen in the centre console drives the minor controls and a whole host of Internet-based products and services. Audio services in the plushest variants come courtesy of a monster Bowers & Wilkins stereo that's juiced up by a 1,400 watt amplifier, 19 speakers, and the latest sound processing software. It even has air-ventilated subwoofers. The electronically controlled air suspension has choice of five modes, including one where the driver is free to tailor the settings to his or her personal taste. XC90 safety gear includes a run off-road protection package which tightens seatbelts and activates energy-absorbing technology in the seats when the car detects challenging terrain ahead. Another system is the auto-braking feature, which cuts in if a driver pulls out in front of oncoming traffic. Both safety systems aim to bring Volvo closer to its vision of nobody being seriously injured or killed in any of its vehicles by 2020.

Volvo claims that the advanced kinetic energy-recovery braking system introduced with this revised XC90 offers drivers up to 15 per cent fuel savings and emission reductions in real-world driving. This new brake-by-wire system interacts with the energy-recovery system and reduces fuel consumption and emissions by recovering kinetic energy under braking. The introduction of these XC90 'B'-badged cars represents a major step for Volvo towards its electrification ambitions. On to the figures, all of which we'll quote to WLTP standards. In the B5 diesel most will choose, expect up to 42.7mpg on the combined cycle and up to 171g/km of CO2. Inevitably, these figures take a tumble with petrol power; the B5 manages up to 32.4mpg and up to 199g/km, while the B6 manages up to 30.7mpg and up to 210g/km. If you want to do better, you'll need to look at the top T8 Recharge petrol plug-in hybrid model, which delivers up to 63g/km of CO2, 100.8mpg and up to 28.6 miles of pure electric driving range. Maintenance should be relatively affordable for a car of this kind, with intervals every year or 18,000 miles. Three or five year pre-paid servicing packages are available to help you budget ahead. The warranty is the usual three year, 60,000 mile package.

Volvo seems to be flourishing under foreign ownership. You might have expected Chinese control to stifle the company's Scandinavian character. Instead, what we've been given here is a return to Swedish charisma and an emphasis on all the things that the Gothenburg brand does best - cool restrained style, real-world practicality and class-leading safety. Of course, this Volvo's not perfect. There are still sharper-handling choices and more capable off roaders in this sector. In balancing these virtues though, this XC90 sets its own class standard and in doing so, establishes a family benchmark amongst luxury SUVs that rivals will struggle to match. Company founders Assar Gabrielsson and Gustaf Larson would have liked this car. More importantly though, if you're shopping in this segment, we think you will too.